In 2014, Aberdeenshire Council in partnership with the community of Banchory commissioned a series of murals in and around Scott Skinner Square. Fin Macrae and Alister MacInnes, the collaborative duo who make up DUFI Art, led the project but worked in collaboration with five other artists. The overall theme for the murals is based on the idea of Banchory as “home”, a place to feel grounded and a place to be part of the community. The imagery used in the murals is influenced by this theme as well as conversations with members of the local community during the artist’s residency, which ran from 7-10th October 2014. 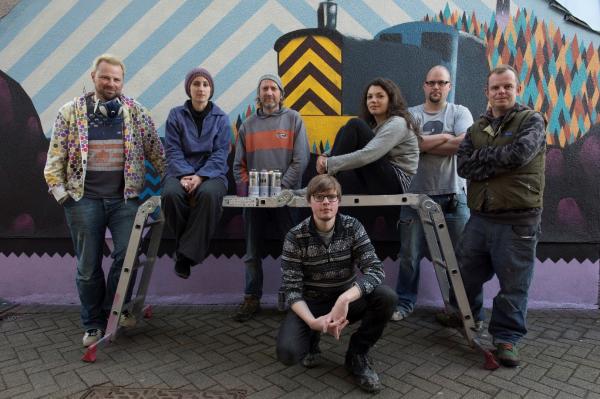 A map showing the location of each mural is provided below. Information on the artists that painted each mural is given along with some interpretation of what the mural represents.

Shona is an illustrator from the Aberdeen area who studied animation at Edinburgh College of Art. She has illustrated comics, short stories and poetry as well as producing animated films and designing cards and t-shirts.

Shona lived in Peterculter as a child, nearby her grandfather who was a marine biologist specialising in salmon. As a family they would visit Banchory in the summer on their way to swim in the River Dye. The images in her two linked murals reflect her memories of Banchory; salmon, trees and the river. From a distance the image is a salmon looking backwards but when you get closer there are lots of details of life in Banchory - people relaxing with an ice cream, remnants of the crannog, lavender fields, images of the railway being reinstated, St Ternan, people fishing and dancing, just to name a few. All of these details combine to form a whirlwind of colour, movement and life.' 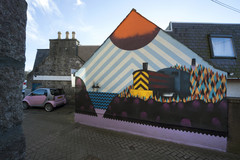 FiST studied at Glasgow School of Art. His previous work ranges from small scale pen and ink illustrations on paper to larger paintings and murals; strong graphic patterns and colours paired with industrial and figurative elements are recurring themes in his work. He has exhibited his work in solo and group shows and has regularly worked as part of various artists collectives.

FiST’s mural explores aspects of Banchory’s industrial heritage, translating imagery relating to these industries into a bold graphic artwork. In particular, he has referenced Banchory’s role as a market town with links to the surrounding agriculture and timber businesses, the historical lavender industry, the Deeside Railway and Banchory as a satellite commuter town for Aberdeen, especially in relation to the North Sea oil sector. 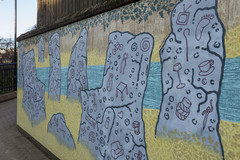 David Faithfull is an artist, printmaker and curator as well as lecturing at the University of Dundee. After studying at Duncan of Jordanstone College of Art and Design, he spent eight years working as an artist and illustrator in Copenhagen. Inherent to his work are current environmental issues relating to the landscape. He has exhibited extensively, both nationally and internationally and has work in collections including the V&A, Tate Britain and the Scottish National Gallery of Modern Art.

David spent time talking to residents in the houses opposite his mural and incorporated many of their ideas of ‘home’ into the work. The central features of this are his interpretations of local trades and the Nine Stanes at Garrol Hill. The mural also conveys the idea of journeying away from and back to ‘home’, in this instance the woodland setting of Banchory and the River Dee. Originally from Dundee and trained in Duncan of Jordanstone College of Art and Design and Edinburgh College of Art, Fraser specialises in the production of large-scale painting and murals. He explores the properties of paint by combining layers of finally misted spray with traditional techniques, and his playful, surrealist compositions aim to excite the viewer through visual ‘theatrics’.

Fraser created the design with images of significant objects from the area; the Celtic Cross set into a wall near the Cemetery, ancient artefacts such as the locally discovered stone balls, axe heads and arrow heads, images of the lemonade factory, lavender industry, and musical instruments, the latter reflecting the importance of Scott Skinner. The images are arranged in the form of archaeological layers, referencing the historical development of the town and creating a complex visual tapestry that presents these objects in a contemporary context.

Natasha graduated from Duncan of Jordanstone College of Art and Design, with a degree in Fine Art. She received the John Milne prize for outstanding painting and drawing and exhibited in the Royal Scottish Academy Annual Open in 2013. Her work is abstract and is often inspired by architecture, capturing the essence of the space she is working in.

Her mural emphasises the low architecture of Scott Skinner Square, creating forms that also lead the eye towards the surrounding hills. She has created a 3-dimensional image by overlapping her abstract, angular shapes. The colours used include lavenders, greys, blues and salmon to reflect the colour of the surrounding buildings. 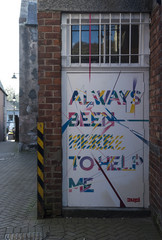 DUFI Art is the collaboration of artists Fin Macrae and Alister MacInnes. Based in the Scottish Highlands, both have extensive experience having worked on art projects and commissions individually and collectively. With a passion for stencil, street and urban art DUFI continues to work on both community and artist led projects exploring alternative forms of art derived from traditional street graphics, in both two dimensional and three dimensional forms.

The DUFI mural Here and There resulted from part of the community consultation process that was completed for the wider Scott Skinner Square improvement plans. A participant had made the comment that when she was going through a particularly difficult time she had huge support from the community in Banchory. They had “Always been here to help me”. Utilising some of the colours that appear in the public artworks in the Square, the work is built up in layers based on their visual interest in deconstructed text and typography.