In 1940 the Newfoundland Overseas Forestry Unit came to Britain to clear forests and to supply timber to assist the war effort. 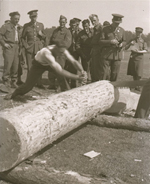 Banchory was host to the Canadian Forestry Corps No 16 Company who set up a camp at Blackhall at the foot of Scolty Hill.

One local resident remembers the movies shown in the camp theatre and chocolate bars! If you have memories of the camp or know someone who has, Banchory Heritage Society would be pleased to hear from you (BanchoryHeritage@aol.com)

Similar camps were established in Glen Tanar and at Ballater.  The Ballater Forest Project has an interesting website with more information at www.ballaterforestry.org.uk.

From an article in the “Illustrated London News” by W.J.Passingham (8 February 1941) - We Visit a Scottish Lumber Camp.  The Newfoundland lumberjacks have been cutting down about 3,000 trees a week – roughly 10,000 cubic feet of timber – for the British war effort during the first year of their work in the Scottish Highlands. They came from Newfoundland at the invitation of the British Government, when timber supplies from the Baltic countries were cut off and shipping space was needed for other and more urgent commodities. From Newfoundland experienced lumberjacks answered the call – French Canadians, Indians, English, Irish and Scots – and came to Great Britain on the next ship that sailed from St. John’s.