About The High Street

Banchory High Street is an attractive shopping area with a wide range of independent shops.  It has a fascinating history but is not the site of the original settlement of Banchory, which was located to the east. The High Street started to be developed in the early 1800s but prior to this, there were some older buildings along the route of the former drove road, including an endowed school built in 1638 (now the Council offices) and a coaching inn which is now the site of the Burnett Arms.

In the early years of the 19th century, the  area was feued by Mr Watson, Mr Shaw and Mr Ewen and a new “turnpike” or toll road was constructed which became the High Street; this was to the north of the former drove road. The feuars were responsible for much of the development that took place over the next few decades.  Initially this was mainly new housing but then shops started to appear. In the 1830s a carrier service was established linking Banchory to the outside world. Within 50 years of these initial developments, the High Street had become the commercial centre of the town.

In 1853 the railway came to Banchory, in part, due to the interest in Deeside shown by Queen Victoria; she had purchased Balmoral in 1848 and was a regular visitor to the area. A detailed account of her visit to Deeside in the same year from the Illustrated London News describes how the people of Banchory welcomed her…“at Banchory the demonstrations were numerous and tasteful. At the entrance to the village was erected a triumphal arch of gigantic dimension, composed entirely of heather, and surmounted by a figure of the British Crown, six feet high...in front of the Burnett Arms Inn, where the Royal party changed horses, and on both sides of the street, spacious hustings were erected for the accommodation of the gentry of the county”.

During the middle of the 19th century, many of the buildings on the High Street were extended to two storeys and after Queen Victoria’s visit, Banchory became a fashionable summer holiday destination for the wealthy from Aberdeen, many of whom regularly rented houses.  In the late Victorian era, the High Street evolved, with shops regularly changing hands. Banchory also gained significant public services including the Town Hall, built in 1872 and still standing on the High Street which also included a public library.  The Town Hall became too small to support the growing population so in the 1890s it was extended. 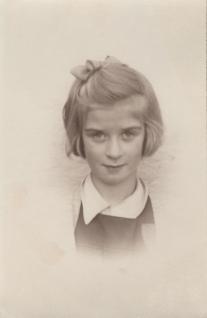 You can hear a fascinating description of how Banchory appeared to an 8 year old child, Muriel Clark, on her walk to and from school in 1938 here. Muriel, pictured here as a young girl, recorded her memories in 2017.  She brings the town to life, with shops, people and relatives colourfully described.   One of her clear favourites was D’Agostinos, Banchory’s famous Italian ice-cream shop. Muriel recounts, “you can sit at a glass topped table and have ice cream with chocolate sauce in a little silver dish with a flat spoon…this costs sixpence and is only for special occasions”.