James Scott Skinner is considered one of the most influential fiddlers in Scottish traditional music. He came to be known as the 'Strathspey King'. 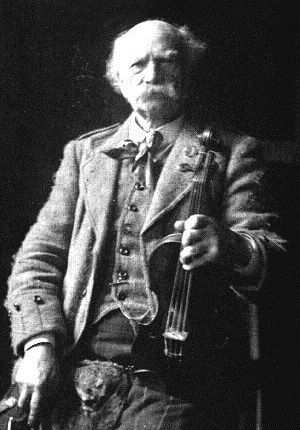 He was born on August 5th 1843 at Arbeadie Village in the Parish of Banchory-Ternan.  His father was a Dance Master and James and his brothers were all very musical.  He composed many tunes which are still being played today. He was a close friend of Harry Lauder, the Scottish comedian, who was chief mourner at Scott Skinner's funeral in 1927.

James was the sixth and youngest child of William and Mary. He was only two when his father died. Seven years later his mother remarried and James went to live with his sister Annie in Aberdeen. James was already playing music by this time, having been taught both the cello and the fiddle from the age of six by his brother Sandy, who was ten years older.

At eight years old James vamped bass lines on the cello to the playing of Deeside fiddler, Peter Milne. Young James tramped miles across the surrounding countryside with Milne playing at barn dances, then making his weary way home in the wee small hours, all for 5/- (25p) a month. He considered Milne to be a father figure and was very fond of the old man, often fetching his 'medicine' (Milne was an opium addict) for him from the local chemist. About this time of his life Skinner says, in his autobiography “My Life & Adventures”; "It was nothing unusual for Peter and me to trudge eight or ten weary miles on a slushy wet night in order to fulfil a barn engagement". Once, returning home at five in the morning, "dragging, rather than carrying, my bass fiddle", he fell asleep against the door, too exhausted even to lift the latch and was found there two hours later by his mother.

When he was ten, brother Sandy arranged an audition for him with “Dr Mark’s Little Men” a children’s orchestra based in Manchester. James signed up for a six year “apprenticeship”. “Jamie”, “the kilted boy”, didn’t have an easy time of it with the Little Men and at one point was sent home for fighting. However, during this time Skinner met Charles Rougier, a French violinist with the Halle Orchestra, who taught him to read music – The Little Men were taught to play by ear. In his autobiography Skinner credits his success as a composer and performer to the tuition he received from Rougier.

Skinner never finished his apprenticeship with Dr Mark, leaving in 1861 he spent several months touring as a black face minstrel with the New Orleans Theatre Company before returning to Aberdeen. Peter Milne recommended taking a course of dancing lessons from “Professor” Willie Scott, with the intention of becoming a “Professor of Dance” himself. During the year long course a friendship developed and Skinner incorporated his teacher’s surname with his own, becoming James Scott Skinner.

In 1862 he won a Highland dancing competition in Ireland and later in the year a fiddling competition at Inverness. He also became a professional dancing master, basing himself in Strathdon. Before long he had a very influential roll of pupils throughout Deeside and beyond, including Queen Victoria’s tenants and children on the nearby Balmoral Estate. Skinner recounts how John Brown influenced that event. “I remember him shoving me right up to where sat Her Majesty in company with the then Duchess of Atholl. “Noo, Skinner”, he said in a quite loud voice when opposite the Queen (he didn’t seem to care whether she heard or not) “Ye’re in the richt quarter noo! Shak’ yer fit man! Shak yer fit!”.

By 1882 he was married with two children, living in Elgin, and his dance teaching took him all over the north of Scotland. "I had the patronage of all the big private families in Ross-shire, Inverness-shire, Elginshire and Banffshire. I was making about £750 a year, and was able to drive to and from the residences of my pupils in my own private trap, drawn by a beautiful pony. This equipment cost me about £150". However by 1885 he was bankrupt. In addition to dance teaching he had been composing and publishing fiddle tunes and it is thought that the publication in 1884 of his most ambitious collection to date, The Elgin Collection, had contributed to the bankruptcy. With his typical flair for the flamboyant Skinner describes it in his autobiography; "The crash came suddenly, and in a single day I was roofless, wifeless, and penniless".

Skinner then gave up dance tuition and concentrated on his fiddle playing. After returning from a disastrous tour of the United States in 1893 he made a decision which was to influence the rest of his concert playing career. “ When I returned from America I made up my mind on two points. Firstly, I decided to have done with dancing. As a solo violinist I decided to stand or fall. Secondly, I decided to make the kilt my platform dress”. With typical Skinner modesty he went on to say, “ With the exception of myself, there was no Scottish violinist of any eminence at this time.” “Success happily crowned my endeavours, and, with its realisation, I bitterly resented the many years I had wasted as a country dancing master”.

While staying in Union Grove, Aberdeen, he met his second wife and by 1897 he had married her and settled at Monikie, near Dundee. There he wrote some of his best compositions. About 1909 his wife 'resigned' and went to Rhodesia. For the next few years, between concert engagements he stayed with friends or lived in hotels until in 1922, at the age of 79, he bought a house in Aberdeen.

For the rest of his life Skinner toured constantly. The high point at this time was probably his appearance with “The Caledonian Four” at the opening of the London Palladium in 1911. However, fashions were changing and Skinner’s music became less appealing to the public. In 1924 after a tour which included the Royal Albert Hall in London he wrote to his friend J Dickie of New Deer;

“I lost £200 on my South tour, but don’t publish that as there were greater losses at Culloden. So lay this scrap in yer kist and no lats giet to daws to pick at. So courage and humour to the end.”

In 1926, although by now in his eighties, he returned to the United States to take part in a fiddle competition. A disagreement occurred and Skinner returned to Scotland without taking part. He died the following year at his home in Aberdeen and is buried in the Allenvale cemetery in Aberdeen.

A memorial stone in Banchory describes 'The Strathspey King' as 'the greatest exponent and composer of Scottish National Music'.

This short biography was compiled by Gavin Gourlay.