In late 2013, Aberdeenshire Council Marr Area Office, working closely with the community, initiated a project to improve the Square. The vision for the Square was to create an attractive, adaptable and vibrant civic space which would act as a focal point for Banchory Town Centre and encourage residents and visitors to spend more time there. The improvement works were completed in August 2015.

Fin Macrae and Al MacInnes, the duo who make up DUFI ART, were chosen as the lead artists on the project and began the process by consulting the community of Banchory. Throughout the consultation phase, DUFI kept coming back to the man after whom the Square was named – James Scott Skinner. 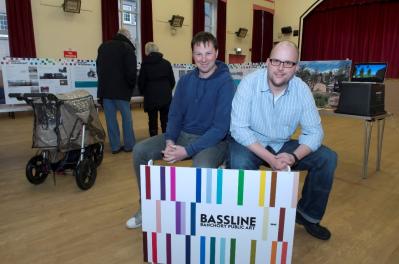 James Scott Skinner was born in Arbeadie village, in the parish of Banchory-Ternan, Aberdeenshire, on the 5th August 1843. His brother Sandy taught him tunes on the violin, and to ‘vamp’, or play a bass line on the cello. By the time he was eight, James was playing the cello at dances with local fiddler Peter Milne who came from Kincardine o’ Neil, Aberdeenshire.

Skinner made his first recording in Glasgow, in 1899. He was one of the very first Scottish artists to be recorded and his recording career lasted until 1922. In this way, his music spread worldwide. During this time, he continued to perform in concerts throughout Scotland. In 1911, at Sir Harry Lauder’s suggestion, he formed ‘The Caledonian Four’ who performed at the opening of the London Palladium.

Scott Skinner was a very talented man who was “definitely a colourful character.”  More information on Scott Skinner can be found here.

The Artworks in the Square

Scott Skinner was a prolific composer and one of his most famous tunes, “Bonnie Banchory”, became central to DUFI’s concept and design for the artworks in the Square. The three imposing sculptural columns are visual representations of the sound-waves created from playing the Bonnie Banchory tune. The columns have integrated specially designed low energy lighting that accentuate the trees. 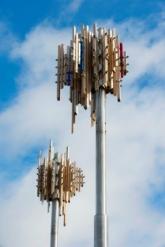 The same concept informs the bespoke street furniture, which includes a table, fifteen seats and two benches. The furniture weaves through the trees and is designed to complement and enhance the existing architecture of the square. Bespoke paving at the main entrances to the square was also designed by DUFI. 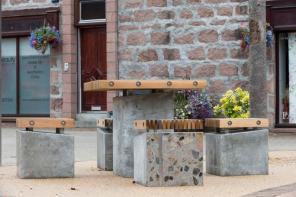 The palette of materials used in the artworks includes stainless steel, larch, cast acrylic, cast concrete and blockwork. The concrete seating cubes are carved open on one face to reveal a core of locally sourced alluvial stone from the River Dee. The street furniture has many subtly located etched messages; which are quotes from community members reflecting their views about Banchory. 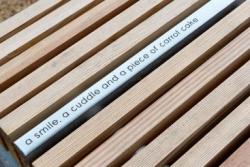 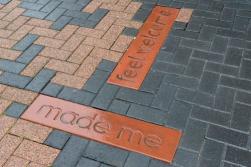 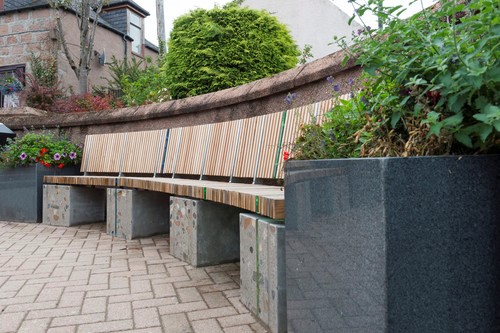 The square also benefited from additional granite planters, with planting designed and donated by Dr Mair of Raemoir Garden Centre.

As part of the project, DUFI also created a Banchory Brand and font and more information about this can be found here.

In October 2014, DUFI managed the creation of a series of murals by a group of artists from Scotland and Ireland to celebrate the Square and these can be found in various locations at entrances to the Square. Working in various mediums and surfaces the artists included references to St. Ternan, the Nine Stanes, the railway, the Dee, the environment, the museum, the architecture of the Square and another quote from a local resident “Always there to help me” - an attitude of mind that sums up the residents of Banchory. More information about the artists and murals can be found here.

Download the recording of Paul Anderson playing Bonnie Banchory for DUFI in 2014.  Paul is one of Scotland's foremost traditional performers and composers with over 500 tunes composed in the traditional Scottish idiom.

The improvement works were funded by Aberdeenshire Council through a range of funding streams including the 100 Days Project Funds, Public Art Scheme and Developer Obligation funds for Banchory Town Centre.

Would you like to hold an event in Scott Skinner Square?

Scott Skinner Square is available to be used for public events and activities run by the community and others in the town. In order to obtain permission to use the square you will need to complete an application form which can be obtained from the Aberdeenshire Council Roads Department at: marr.roadenquiries@aberdeenshire.gov.uk There will be no charge for community or charitable events, but commercial events will be charged a small fee.

If your planned event will cause traffic restrictions in the Square (closure or no parking) a restrictions application would also need to be completed and this can be obtained via the same email. Charges will be levied for such an application. Details of all costs can be obtained from the Roads Dept. Applications should be submitted at least two weeks before the planned event, unless the event will last for more than five days, in which case applications should be submitted at least three weeks in advance.

If you need to use an electricity supply for your event (free of charge) please contact marr@aberdeenshire.gov.uk

You may need a Public Entertainment Licence (or another form of Licence) for your event, please check the Aberdeenshire Council web site for guidance at: www.aberdeenshire.gov.uk/licensing/events/events/

Download our printable quiz - find all the phrases hidden in Scott Skinner Square!